About 1200 kilometres north of Perth a peninsula juts into the Indian Ocean. Known as Cape Range, the Western side of the peninsula is largely covered by the Cape Range National Park . It does have one modest town and that is Exmouth which overlooks the gulf that shares its name.
Our campsite in Exmouth was endowed with emus. They, like many species, eventually get so used to a human presence that they develop scavenging traits. Resort residents are asked not to feed them, but of course many do just that. 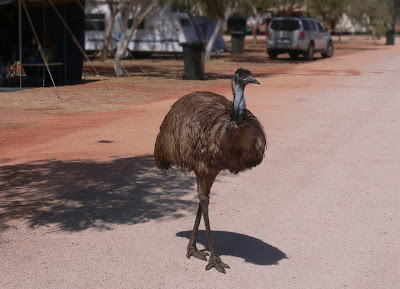 The peninsula's tip is the North West Cape which like many of the world's promontories boasts a functioning lighthouse, however a little to the south west high on another outcrop there is an older lighthouse named the Vlamingh Head light. It was superficially damaged in a cyclone a decade or so ago and was restored complete with paraffin lamp. It is a tourist attraction and it is only lit on just a few occasions each year.

The Indian Ocean side of Cape Range peninsula. 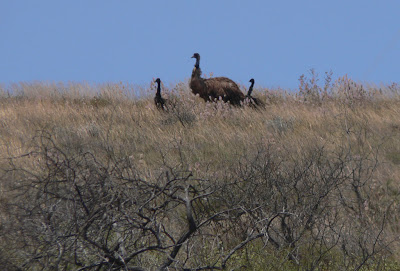 More Emus, but wild ones this time. One long neck and two stubbies ...is that an Australian 'beer' joke? 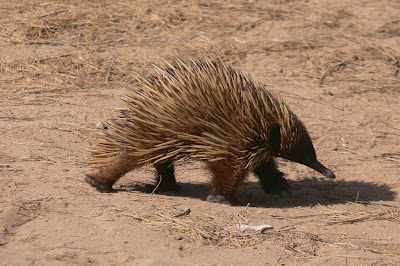 An Echidna, just wandering purposefully through the area where we proposed to pitch tent. In fact we failed on that occasion. The wind was so strong, that even with the help of a chap in a trailer tent alongside, we couldn't put our canvas up. Nor could we put the pegs into the concrete like ground, so all in all it was doomed to failure. Here in Yardie Creek, we spent our one and only night in the car. Thank goodness for reclining seats. 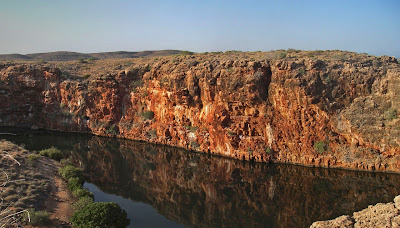 Two views of the beautiful Yardie Creek Gorge. We did the early morning thing and walked the crest of the gorge whilst the sun was in the right direction and not too fierce.

Note the tranquil waters; ideal for the mirror effect so sought after by photographers!

Turquoise Beach. Dotted along the National Park coastline are beaches, probably just as fine as this one, But Turquoise boasts 'the best drift snorkel in the world'. Pretty heady boast is it not? We had to try it out of course, and it was great fun. The current took us through the reef areas at at a steady pace, so we did it twice - and it was very good indeed. Later we tried the calmer waters in a different area of the bay and that was good too.
I thought I would leave Ningaloo George to say goodbye to Exmouth. He is a replica whale shark made from fibre-glass. These creatures can be seen in the seas around Exmouth between March and June. Hmmm... missed again. 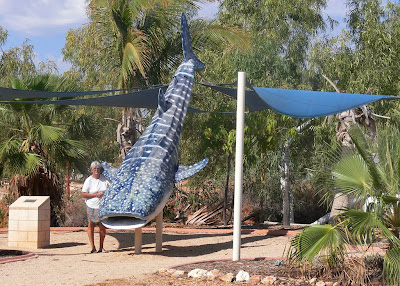