In 1883 Broome was decreed to be a township by Sir Frederick Napier Broome, then Governor of Western Australia. Ironically the Governor didn't want to be associated with the new "town", which at that time wasn't much more than a few struggling camps of pearl fishermen.
The town is on a peninsula that runs roughly north/south and therefore has an east beach (Roebuck Bay) and a west beach (Cable Beach). We were amazed to see the beaches populated by 4WD vehicles.

At the south-western extremity of the peninsula Gantheaume Point has two major attractions; dinosaur footprints dating from the Cretaceous Period 130 million years ago. They are only visible at low water stages of tide, but checking tide times is no challenge to us seasoned sailors, so we were there searching at the appointed hour, which happened to be around sunset.
They took a little finding, no 'idiot' markers or boardwalks here, but they were fairly plentiful and quite dinstinct. 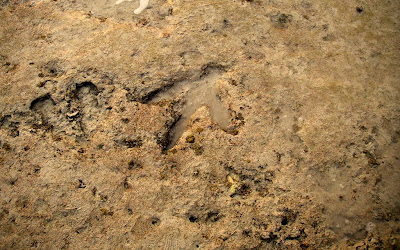 The second point of interest focusses on the beautiful red rock cliffs. So many vantage points and so many photos. This is just one as a sample. 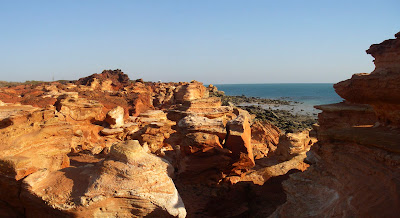 The Sun Pictures 'garden cinema' is a wonderful tourist attraction. Billed as the oldest garden cinema in the world, it was a major focal point in Luhman's recent epic; 'Australia'. For in this cinema our child hero sees the Wizard of Oz. 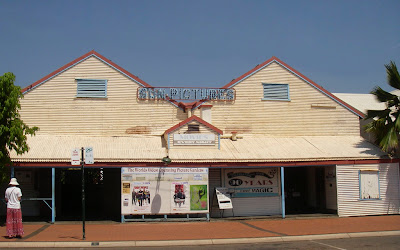 The auditorium is partly covered and partly open air. This is the view from inside. 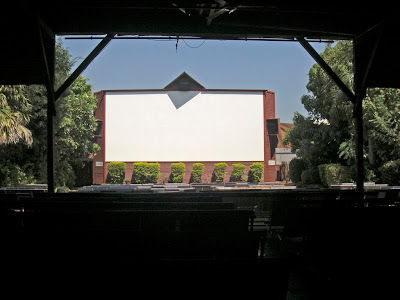 A view of the inside shows plenty of memorabilia of 'Australia'. You can Nicole and Hugh in classic pose on the left.

The seats were actually very comfortable as we found when we visited in the evening. Great fun sitting in the warm evening temperature to watch a film as the stars appear over your head. Yes, I know it becomes much hotter and stickier in the wet season but for us it was a perfect evening. Apologies for the picture quality, but I felt the next photo had an 'atmosphere' which suited the emporium. 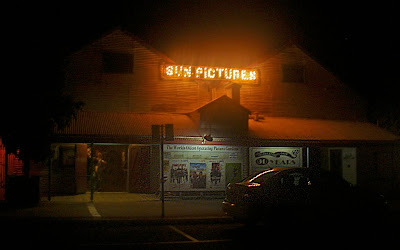 The town has an interesting history based around the exploits of the men and women who developed the pearling industry, starting with the harvesting of oysters for mother of pearl in the 1880's to the current major cultured pearl farming enterprises. The riches from the pearl beds did not come cheaply, and the town's Japanese cemetery is the resting place of 919 Japanese divers who lost their lives working in the industry. Many more were lost at sea therefore the exact number of deaths is unknown. 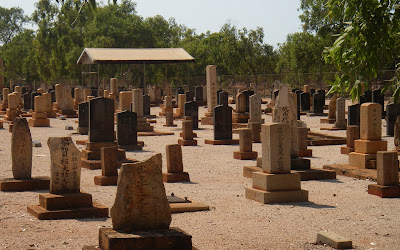 Streeter's Jetty was built to enable the old pearling vessels to moor and off-load crew, equipment and cargo. Still in private ownership, it fell into disuse as the pearling industry changed and began to decay. The local shire council bought the jetty and now has a restoration programme. 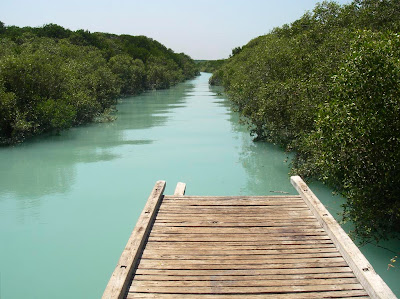 Another relic from those pearling days is now the internationally acclaimed Short Street Gallery of Indigenous art. It was built over 100 years ago and is the last remaining house with a wind tunnel. It is an important part of the Malay and Japanese contribution to the pearling industry in Broome. 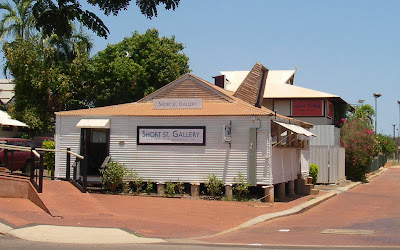 In a prominent position is the statue of a diver. We imagined pearl divers clad only in a loincloth and able to stay submerged for minutes on end. That was in fact the situation at first, but the shallow waters were soon cleaned out of Pinctada Maxima (the pearl oyster). This led to the end of the local divers services and the introduction of 'hard hat' diving. Divers from Japan and Malasia arrived and as productivity became an essential feature, this more protective type of deep sea kit was used, allowing the worker to collect far more oysters per hour. 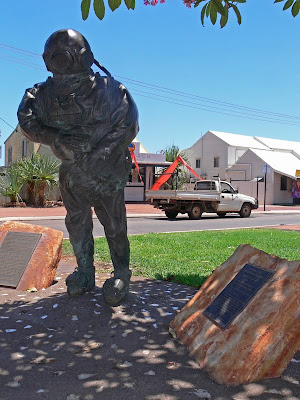 The following shot is just a typical scene which is replicated in many towns that we have visited. In a way it is reminiscent of the Caribbean. The local peoples gain cover from the sunshine under trees and quite large groups seem content to chat whilst sitting on the grass. 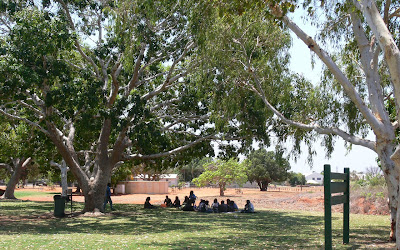 Roebuck Bay contains a sunken armada of historic flying boats from World War II. They were all sunk in a matter of minutes of each other on 3 March 1942 by Japanese action. The guide book says that they can be reached on foot at extra low tide. Such an event we discovered was at the crack of dawn, whoopee ...but one has to make the effort.
We woke at 4:30 to find thick fog. But we found the beach ok and so did scores of other tourists, a high percentage of whom were Japanese. It was a long walk out to the wrecks and the human trail reached out into the mist. 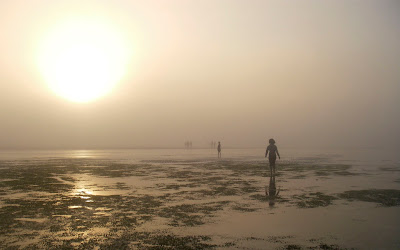 The wrecks were clearly recognisable and there was time for a few photos before the return trip. At this point the mist descended even more thickly making it impossible to see the land and the gaggle of fellow tourists had long since thinned out. We ended up a little off course when we eventually hit land, but it was a fun exercise. 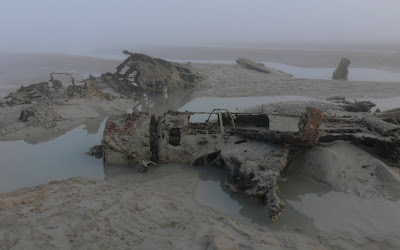 The old lockup was a charming building. 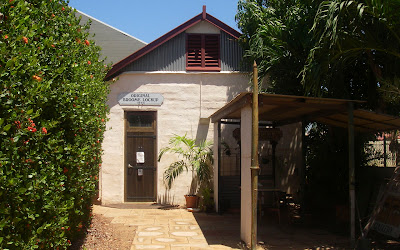 Matso's Store got its name from Broome City councillor Phillip Matsumoto who ran a grocery store and school tuck-shop in the premises from 1978 to 1985 and who, as the son of Japanese diver Kakio Matsumoto and his Aboriginal wife Helena, was of the second generation of Broome's mixed ethnic population. It is now a very attractive pub/restaurant. 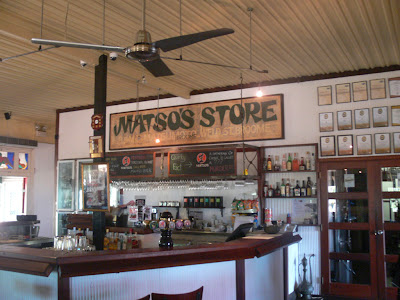 Tourism began to emerge as an important business for the town in the early 1900's. Since when Broome has been a destination for visitors (both local and international) attracted by its warm winter climate, diverse cultural history and white sandy beaches. A concentrated effort led by Lord Alistair McAlpine to resurrect the historical charm of the town led to restoration of many of the town's old buildings and a sound plan for Broome's future.
A view of one the white sandy beaches (looking a tad golden in the late afternoon light) - with a Boab tree. Idyllic isn't it? 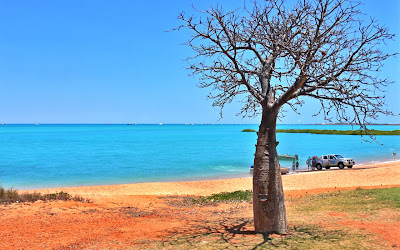 In 1889, the simultaneous opening of the privately owned Cable Station and a Government owned telegraph station put Broome in direct communication with Asia, Britain and cities throughout Australia.
The year 1914 was particularly bad for Broome because the outbreak of war ruined the European market for pearl shell. When conditions returned to normal after the war, the buildings the government used for justice purposes were no longer adequate and the Cable Station was acquired for conversion to a courthouse. 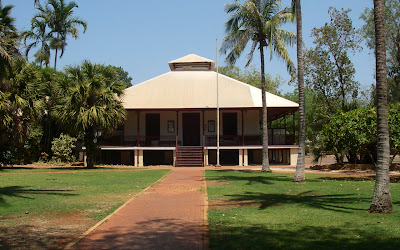 It is an elegant building, redolent of an age of style and gentility. 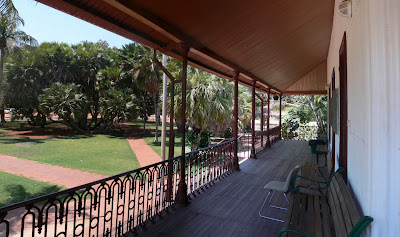 The tourist shop and restaurant area by comparison is bright, gaudy and far more cheaply constructed. 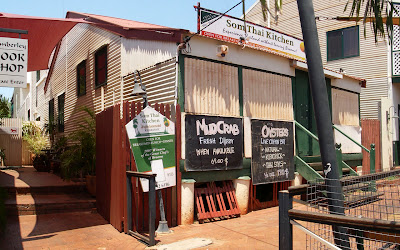 Broome is also home to the 'staircase to the Moon'. Sadly, not for us. It's last appearance this year was about two weeks prior to our arrival, so in compensation, here is a sunset scene. 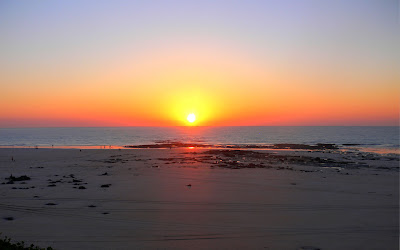