Dawn on the morning leaving the campsite at Kununurra, Liz spotted the same view as the sunset in the last entry but with light from the opposite horizon. 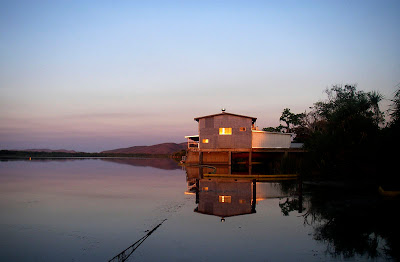 Leaving Kununurra and heading South and slightly West once more the landscape is stunning and typically Kimberley.

We knew this to be cattle country, but we didn't expect the beef to look like this. 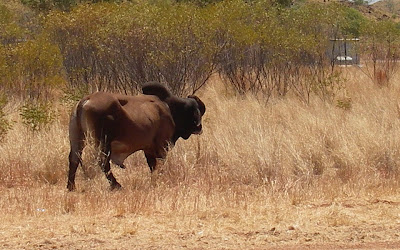 We pass places with names that spring from stories about the outback. Texas Downs and the one shown below - Alice Downs. We were told that both these stations are completely cut off during the wet season, accessible only by air. Some of these stations cover areas the size of small countries. And this is the entrance! (or one of the entrances) 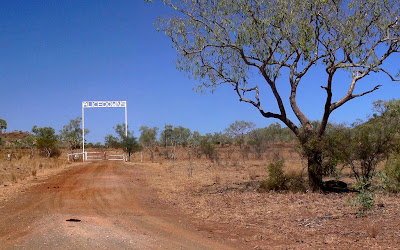 We approach Hall's Creek. Most Australian towns have a sign showing the name, however some are more colourful than others. We liked Hall's Creek's sign. 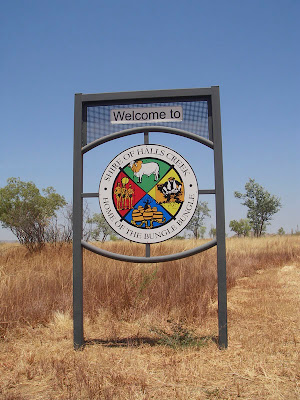 There was only one campsite, so we pitched our tent and had a short look around. We went a little further afield the following morning and discovered more about the town's history.
Hall's Creek is the product of gold discovery. It was moved 12 km west from its original location in 1949 due to a new Great Northern Highway being constructed, which did not follow the route of the old Duncan Road. Sadly it was not possible to visit the old town by our car. It would have been the end of the town, if it had not moved to its current location. Named after Charles Hall who in 1885 found the alluvial gold that led to the Kimberley gold rush, the first gold rush in Western Australia. Today some gold mining is still carried out by local prospectors, however large-scale mining has ceased.
Policing was always an essential element of outback life and men drawn from the indigenous community were employed as Trackers. An original tracker's hut is shown below. It is maintained as an historic building of interest. 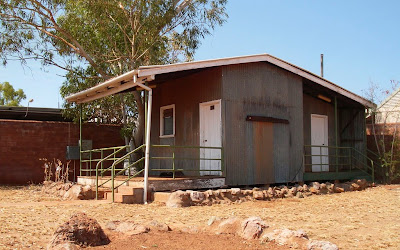 Tracker Jack Jugarie became a legend and a statue stands in his honour in the town. 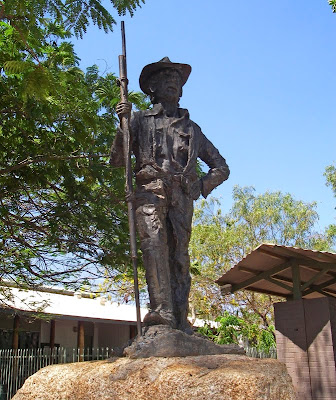 These remote townships have many tales of heroic or amazing exploits. The statue of Russian Jack (which stands outside the town’s shire office) depicts Jack carrying his friend in a wheelbarrow. The legendary story tells that Jack, a gold miner, pushed a gravely ill fellow miner 300 kilometres in his wheelbarrow.
His determination to get him to the nearest medical facility in Wyndham made him a hero amongst his fellow miners during the 1885 gold rush. 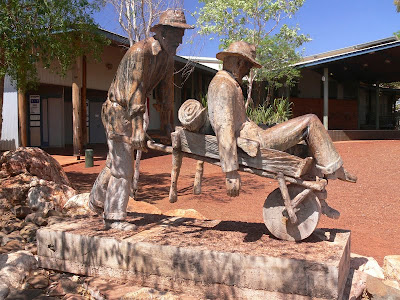 We feel that this picture typifies the colours and harshness of the environment in this part of the country. The advice on the roadsign probably goes without saying. 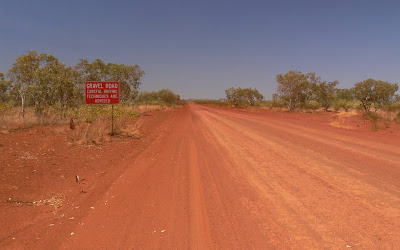 A turn off the main highway to a rest stop also yielded a fine lookout. The road can be seen passing through a range of colours from red and yellow rocks to blue/grey grasses. A beauty of its own. We stopped here for lunch, but not for long. The flies were very persistent and cunning too. They tried to disguise themselves as grain seeds in our sandwich rolls. Yuk. 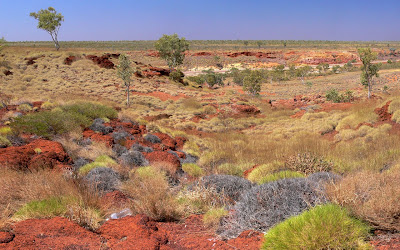