Across the Gulf of Carpentaria


We remained only overnight at the Bay of Cape York. Our plans had included a visit to Seisia, a small but active township on the West coast of the Cape York Peninsula. However two major detractions forced us to abandon the plan; firstly we were short of time and secondly the depths of water in the area of the anchorage were rather shallow depending on the tide. So we headed for Endeavour Strait, a journey that took us past the entrance to Seisia, and took us at speed!

The current had to be in our favour to enable us to sail the route and we timed it carefully. Leaving our anchorage also required care - we had watched as a fellow cruiser ran aground on a sandspit just minutes before our own departure. At least he had kindly highlighted the extent of the shallows for us! 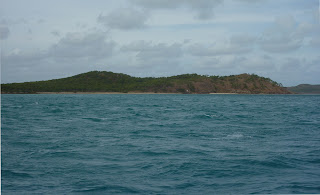 Passing alongside Possession Island, (the spot where, just before sunset on Wednesday 22 August 1770, Lt. James Cook declared the coast British territory in the name of King George III)  having established that Australia was in fact an island. We were achieving over 10 knots as we raced through and this continued for a number of hours, almost until Endeavour Strait in fact. At this point we moved into the Gulf of Carpentaria and the sea state changed. We had been prepared for the benign smoothness of the coastal waters to morph itself into the lumpiness and short chop of a typical shallow waterway and it did!

As dawn approached we picked up an unexpected passenger in the shape of a Booby. He looked enormous at close quarters, and Liz took several photos, expecting at each click of the shutter he would take fright and go. But no, he was settled in for a jolly good rest! 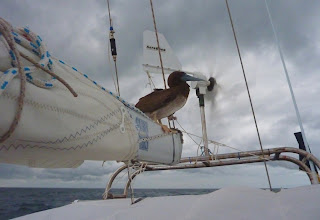 It's official, the Gulf of Carpentaria is lumpy! But it was downwind sailing and we made steady progress. Our plan was to break our journey at the Wessel Islands - about 300 miles West - in Two Island Bay. Our friends Beth and Bone [s/y Splinters Apprentice] had passed this way a few weeks earlier and had written to recommend it as a good anchorage. Two Island Bay is situated on the Western side of the Wessel Island group, just 5 miles South of its Northernmost tip. Typically, we arrived about 2 hours before daylight, so we opted to stay offshore until the way was visible. It was indeed a very pleasant place to anchor, even though there was a very strong tidal current flowing even in the head of the bay. Extreme weather does herald fine sunsets...

The weather forecast had for several days been warning of winds in excess of 25 knots and there was no relief forthcoming as we listened to the short wave radio broadcast. So, there being no point in delaying, we pressed on, now of course in the Arafura Sea. The sea state was no longer particularly lumpy, but the winds did pick up and we regularly saw 30 knots. Another stint of (just under) 300 miles and we reached Port Essington, which is a very large inlet with several places for shelter. Again we had been recommended a safe stopping place and so we made a bee line for Coral Bay. 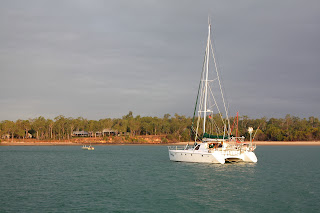 We arrived there to find 'Cop-Out' the Canadian flagged catamaran of Ken and Wendy who had been so hospitable in the north of Queensland and also Atlantia, a lovely large ketch owned by Will and Margaret a charming British couple whom we had met before. They had been in the bay long enough to have explored the nearby settlement, which is aboriginal and has a tourist facility. They planned to leave the next morning and we felt we should do the same as the tide times were favourable as was the weather.

Just a day sail took us to Alcaro Bay which is situated no more that a couple of miles from the notorious Cape Don, where the timing of currents is crucial.

Whilst there we took a trip on Ken and Wendy (Cop-Out)'s dinghy. This is reputed to be an area rich in wildlife, notably the infamous saltwater crocodiles (salties). And we spotted on emerging from the creek onto the sandy shore. It was only about 20-30 metres away and Liz and I looked at each other '...hmmm, is this wise we asked ourselves!' they call dinghies 'salties teething rings' in these parts. 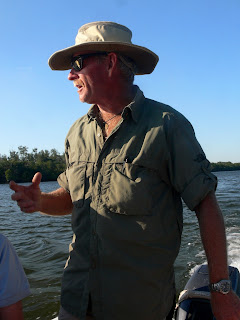 Our trusty skipper seemed unconcerned however, so we pressed on a little longer but no more salties appeared.

Many boats wait at Alcaro for the right timings and we did the same. The following morning saw us sailing very gently around Cape Don and getting a mild current boost as we headed South across the mouth of Van Diemen's Gulf.

Nothing is straight forward however, and we suffered another fuel blockage which restricted our engine speed to just a little over tick-over. This was fine whilst the current was with us, but as the current direction shifts 180 degrees every six hours or so, we had to content ourselves with just better than breaking even for the remainder of the time.

We did have a brief stop-over for a rest near to Cape Hotham, but we were off very early on the final stretch to Darwin. It was a long run in totally calm waters, partly motoring at 7 knots and partly at 1 knot depending on the state of the current. However as we entered the Beagle Gulf, the wind started to pick up and by the time we were approaching the city limits of Darwin, we had over 20 knots on the beam ...we were hurtling into the busy harbour. We took in a bit of sail to make our progress more sedate and then finally made radio contact with Tipperary Marina (they call it Tippery here - just to be different) and were directed into our pre-booked berth. Phew!