Coral Bay is for beach holiday makers. It focusses on a gloriously beautiful beach/bay with turquoise water and white sand. We heard that it was possible to see sharks from a point around the bay. We walked the curve of the bay for about a mile or so and sure enough there they were. Not monster specimens, but plenty of them just lazing in the shallow water. Anyone for a swim?
Just on the other side of the bay (where we had walked from) families with children were paddling and splashing happily. The sharks don't visit this end of the beach apparently.

Later in the afternoon there was a special 'fish feed' happening and dozens of big fish turned up right on cue. The children thought it was great fun as the fish swam through their legs actually touching them at times. 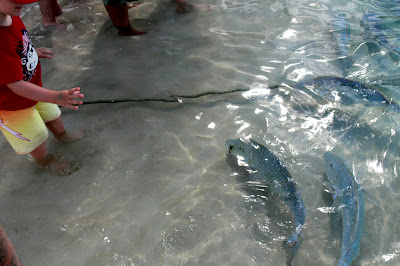 The big high-light for us however was a snorkel on the coral - from which the bay no doubt gets its name. Fabulous!
Posted by Graham at 9:00 am