Well, actually Hamelin Pool, just a little poetic licence. This part of Australia was a popular stopping place for Dutch (1616 and 1697), British (1699) and French (1722, 1800 and 1818). They all left their mark, (actually they mostly left their names: Dirk Hertog, Vlamingh, Le Freycinet, Peron, Hamelin, all still landmarks hereabouts). But in 1858 Captain Denham aboard H.M.S. Herald set about charting the entire area. Since then it has been populated by British Australians.
The Telegraph Station was built in 1884 as a vital link between Perth and Roebourne. It now contains a museum. 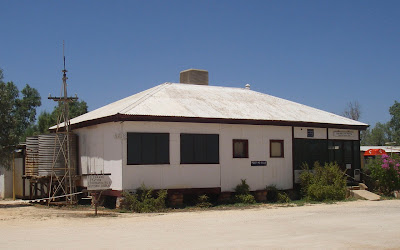 The old quarrying area shows where the blocks of coquina, the material used for making the buildings were cut out. It is composed of tiny white shells that have dropped to the ocean bed in such profusion that they have eventually formed a solid mass.

A close up of the material used. 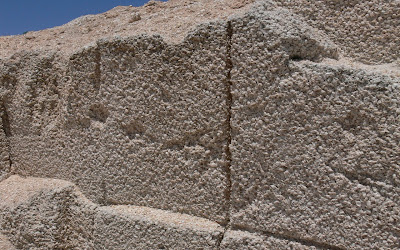 The big attraction was to see the Stromatolites at Hamelin (named after a french 'naturaliste') Pool. There was a beautifully constructed board walk designed to provide a good view of these prehistoric life forms, but protect them from further damage. 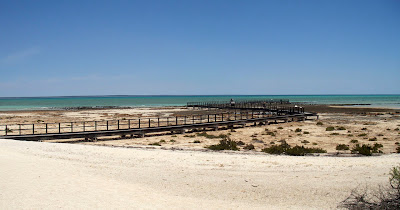 The labelling was fun. "Meet Stumpy Stromatolite" it declares; and proceeds to provide easily digestible facts on boards along the way. 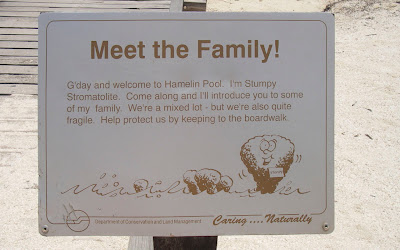 They are quite colourful formations, mostly grey but with some reddish rust coloured that result in an interesting overall effect. 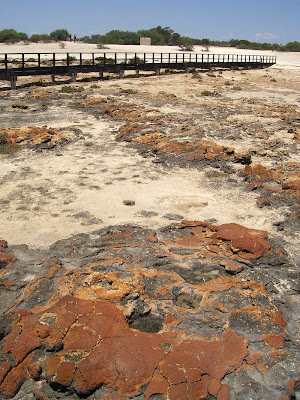 From the boardwalk it is possible to see tracks of vehicles leading from the shore.

In the late 1800's and early 1900's, camel trains transported wool from nearby pastoral stations to a Government wool shed once located here at Flagpole Landing. Wool bales were carted to the foreshore in small drays, loaded in dinghies and ferried out to a waiting lighter (a small sailing ship).
The lighter then sailed 190 kms (118.75 miles) to a deep anchorage off Dirk Hartog Island where the cargo was transferred to a larger ship for the journey to Fremantle.
As anyone who has read Bill Bryson's account of the universe will know, stromatolites give off oxygen and over 2 billion years gave off enough to sustain life as we know it today. This photo shows the glint of air bubbles being given off by the stromatolites - is that what they are talking about? 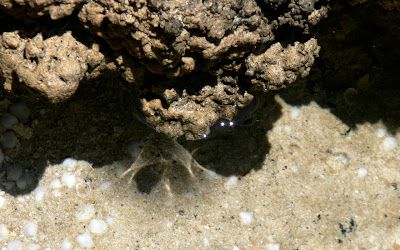 Leaving Hamelin Pool for Denham, we passed a beautiful sign. Fancy calling a place Useless Loop. In fact it was a name given by the French approaching from the sea. They declared it a 'useless harbour' as it had an impassable sand bar across its entrance. Sadly it was a bit too much of a diversion. So we pressed on directly to Denham (named after ...you guessed, Captain Denham of the HMS Herald). 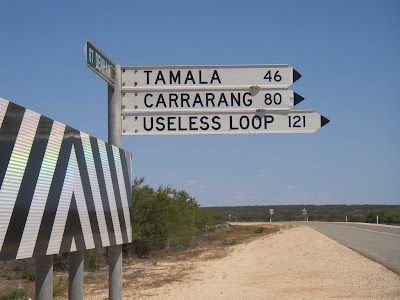 End of the day at Denham harbour. 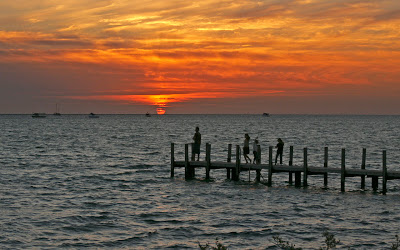