Nusa Kode–Just a dot on the map It doesn't happen every journey, but we set our sails leaving Waingapu and with the wind blowing from astern we enjoyed a wonderful sail all the way to our next anchorage - Nusa Kode. 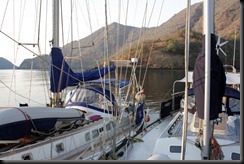 Nusa Kode is tucked very neatly into the southern tip of Rinca, which is in itself a tiny satellite of Flores. However it is large enough to have several picturesque anchorages. Good information was available about anchoring spots on the Komodo National Park website, so we had several options as we approached. Sal Darago entered first and checked out the two main options before our arrival. There was only one sensible place and that was to tie up to a large mooring buoy alongside Sal Darago. 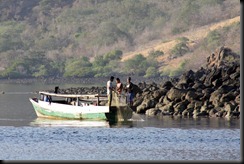 We woke up early to the sounds of a local fishing boat with just three young men aboard. A cheery wave from them and they carried on with their work. 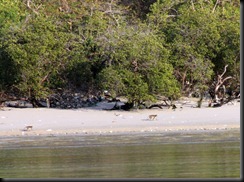 With binoculars we were able to see on the nearby sandy shore, monkeys, a deer and 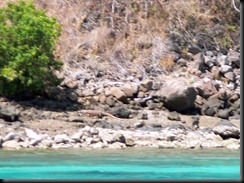 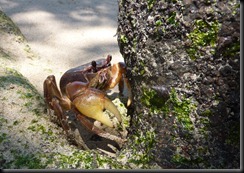 As the day warmed up the animals disappeared and we took our dinghies ashore and had a preliminary scout around. Huge amounts of rubbish had washed ashore. There was no habitation on the island, so we could only assume that the rubbish was just a by product of the wind and waves. A great shame, but totally invisible from anything more than 50 yards offshore.

However you can’t keep a good scavenger down and this little chap was scratching a living in the rock pools.


Then came the winds. They were katabatic in form. Bullets of wind that came down the cliffs swiftly and with great speed. Thirty knots was regularly topped and we were rather thankful that we were securely tied to a massive 'commercially' sized mooring buoy. 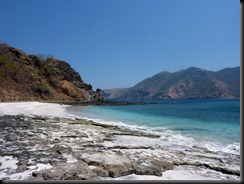 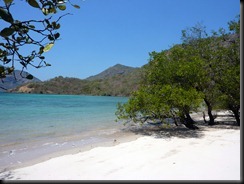 In between bouts of severe wind attacks we did some snorkelling and found that it was a special place under the surface with many varieties of reef fish  darting about in a rock and coral garden. (No underwater shots I’m sorry.)

Small wonder that tourist diving boats kept arriving and departing throughout our stay there.
Posted by Graham at 4:00 pm