Leaving Nusa Kode we didn't retrace our route in, we simply carried on around the island until we reached open water again. Then headed north up the west coast of Rinca.

At slightly under 200 square kilometres, Rinca (pronounced Rincha) is one of Indonesia's smaller 'significant' islands, it has a population of under 1,000 people but it is surrounded by turbulent waters; whirlpools and currents running up to 10 knots can be found (or in our case - have to be avoided). 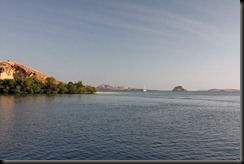 Planning the tidal direction is a bit like forecasting the weather - sometimes you get it right and sometimes you get it wrong. This time we were right and we enjoyed a pleasant passage from Nusa Kode to Teluk Ginggo (Ginggo Bay). Our notes from Beth and Bone on Splinter's Apprentice recommended this spot, so we headed directly there. As we approached the Bay, the winds were steadily increasing, but coming from the south they were beneficial to us and we made excellent time arriving at Teluk Ginggo. Anchoring was tight, very few places afforded a comfortable depth of water, being either too deep (>18 mtrs) or if the right depth, too close to shore. Sal Darago found a spot and as luck would have it, a fellow rally boat was just leaving from a spot nearby, so we waited until they had weighted anchor and departed, then moved into their place. We later heard them on the VHF radio saying that they had had to abandon their plans to head south to Nusa Kode as the wind strength was too much to sail against so they were heading west to Komodo instead. 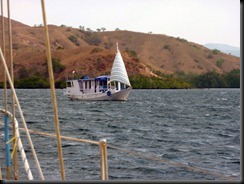 It was a peaceful spot for us and very scenic, but we were ready for an early start the next morning and our target was Loh Buaya, the headquarters of the Rinca National Park and a recommended place to spot Komodo Dragons. We battled our way through stiff headwinds to get to Loh Buaya, but on reaching the estuary leading to the Ranger Station, the wind dropped and the full beauty of the place hit us. The Ranger Station was sited at the head of an estuary, approximately 2 miles from the mouth and it was calm. We could see the jetty only 50 metres away and several local boats obviously designed for carrying groups of tourists were tied up there. We knew that the best time to do a tour was in the early morning, so it meant that we had to make contact without delay. So, dinghies launched and we went ashore. 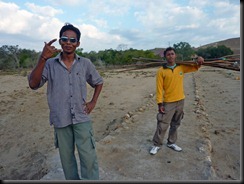 We were welcomed by two groups, humans and monkeys! 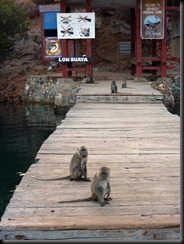 The monkeys were actually quite unconcerned and they ignored us even though we were walking within arm's reach of them, the humans however were keen to escort us to the Ranger Station and tell us all about their work. The walk to the station was fun in itself, having passed the monkeys we walked through some interesting territory, fairly sparse and desert-like, but with clear signs of animal habitation. 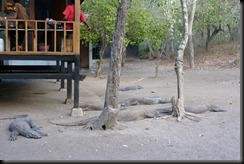 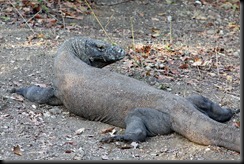 Approaching the enclave of wooden buildings that form the Ranger Station we could see Komodo Dragons lying about all over the place.

We both thought that they would be difficult to find, rare species involving a hard hike in order to get just a glimpse. But, we were told that they, like so many wild species of animal, are susceptible to scavenging, and they hang about the encampment in the hope of picking up scraps. They were massive, impressive and definitely intimidating ...but sadly out of context.

We arranged for a conducted walk the following morning; seven o'clock sharp and bring water.

At the appointed hour, we dinghied up to the jetty and were met by our guide, pausing only briefly at the Ranger Station surrounded by its coterie of dragons, we set off into the dry jungle area. We were shown pits in the ground which had been 'nests' of dragons and all the time we were keeping a sharp look out. Before long, a dragon was spotted, slinking through the bracken. By this time we were just approaching the open ground and it wasn't difficult to keep an eye on his progress. Soon he moved into a sunlit area and stopped. Our guide explained that this would probably be his resting place for a little while. Like all cold blooded creatures he has to use the sun to warm up and would remain sluggish until he reached optimum temperature. 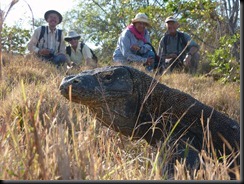 We approached quietly, they are dangerous creatures after all. But our guide asked if he could take our cameras to get a 'souvenir' shot. Then armed with the cameras, he circled the dragon and took a shot with the dragon in the foreground and us looking on.

We he got back he offered any of us who would like a closer look to come with him. Liz volunteered at once and before long, she was at the tail end of the dragon, stroking its scaly skin. 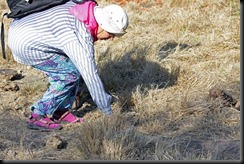 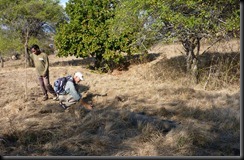 Not to be outdone, I had a go too. 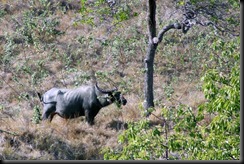 Further on in the bush we saw water buffalo and evidence of pigs. Dragons are carnivores of course, so it was only to be expected that suitable mammals would be living on the island as well. Incidentally, we heard that one of the rally boats anchored at another island nearby lost their dog to a dragon! They (possibly foolishly) took it for some exercise ashore and met up with a Komodo Dragon.  ...end of dog. 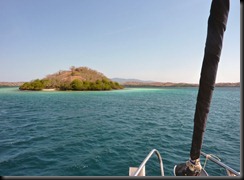 Back on board, we discussed the next move. Jeremy fancied moving out to the estuary entrance where there were a couple of possible alternative anchorages, so early afternoon we were under way again and did in fact find a lovely spot in the shelter of a smaller island. We could see the steady stream of tourist boats heading in to the park and we felt just a little smug having had the benefit of an early start and no crowds. 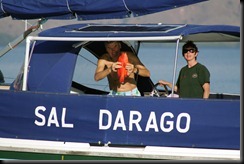 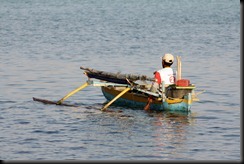 At evening time, a lone fisherman paddled by and we asked if he had any fish to sell, "not today", was the reply, but what we didn't realise was that he would be out that night to remedy that deficiency.

Just after dawn, he was back with a beautiful red fish which (for a very reasonable price) went on board Sal Darago, but which we shared that evening. The next day our plan is to make our way to Labuan Bajo on the Island of Flores. 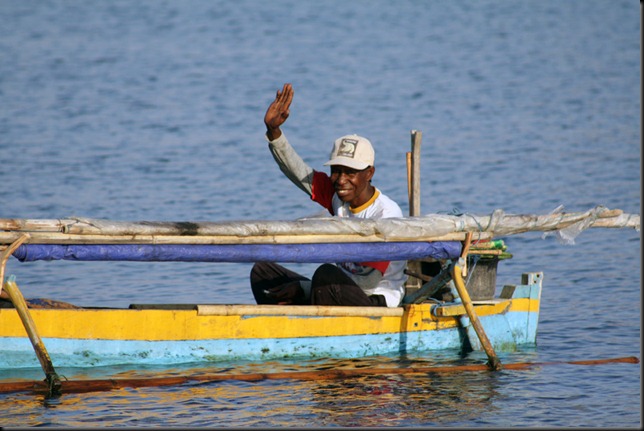