Tipperary Marina was an ideal location for us. The marina manager, Keith, was helpful and always busy keeping the place smart and up to date. We enjoyed meeting up with several friends berthed there, notably Beth and Bone from Splinter's Apprentice who when in UK, live only 20 miles or so from the Mousehouse.

Now down to business. We have an engine that needs attention, a roller furling that jams and several small niggling repairs to do. Taking Keith's advice, we engage the services of Nafea from Cullen Marine Services. And what an intelligent and hard working man he proved to be. No instant diagnoses here, Nafea worked his way systematically through the electrics and the fuel line before coming to the conclusion that we had blocked hoses due to dirt in the fuel tank. He then set about draining the tank, which contained nearly 200 litres of diesel and spent what seemed like hours scrubbing and cleaning until it was spotless. The diesel was filtered before putting it back and ...Bob's your uncle! Job done.

The days flew by, including several barbecues, (marinas can be very sociable places) and many trips around Darwin buying parts and provisions. Everyone says how difficult it is to obtain foodstuffs and drink in Indonesia.

This photo is taken from the Yacht Club on the occasion of an 'official' Indonesian Rally pre-departure meeting and barbecue. The boats are anchored in Fanny Bay.

Our lockout for the rally was actually the day after the official start time. Only so many boats can pass through the lock during the half tide slot, so as we were not in a desperate hurry to be first off the line ( and we had not booked in advance), we volunteered to lock out the day after the start date, so we had a very relaxed departure, no jostling, no waiting for the flag to drop, we just went.

It was a very calm day so we ended up motoring and managed about 20 miles when the engine died again. Bother! ...Double bother! We carry spare jugs of diesel, which are definitely clean, so I secured one of these firmly in the saloon, just over the engine compartment and using a couple of lengths of diesel hose I fed the engine directly from the jug. That worked beautifully, so we turned about and we were in Darwin just before darkness fell.

Repairs took several days, this time we replaced the old copper line with new plastic/rubber hose and that appeared to cure the problem. Let's try again.

It was 29th July before we set off again. Still there was no wind, so engine on again. It's a four or five day run to Kupang, and we sailed - albeit slowly - for a couple of those days, but for the remainder of the journey the engine performed faultlessly ...until we were alongside the southern coast of Timor, then it happened again! How could that be? We had completely renewed the fuel system!! But it did - and we linked up the fuel jug once more and motored to Kupang.

The final stretch, heading east along the north coast of Kupang was into 25 knot winds. The sea was rough and lumpy and we made slow but steady progress whilst constantly looking for the anchorage. The detailed charting was confusing and the co-ordinated provided by the Sail Indonesia Rally organisers is 'approximate'. Not to worry, the Rally organiser, who was on board a motor boat saw us coming and not only gave us directions to an anchoring spot, but also requested us, very urgently, to launch our dinghy and come straight to the beachside restaurant to meet the officials who were waiting.

A tall order actually. The seas were really rough and the wind still topped 20 knots in the (open) anchorage. Nevertheless we did as we were bid; anchored, launched the dink and sploshed our way to the beach. Normally I would be expected to ferry the officials back to the boat to finalise the paperwork, but looking at the conditions outside they all agreed that a site visit was not essential. All that is except one, the young Customs officer who bravely did the trip with me and got his neat uniform totally saturated. The boat examination was pretty perfunctory too.

Now to settle back and just take a good look at Kupang from where we sat.

It's so wonderfully atmospheric. The little fishing boats at anchor nearby are of a design that we had only before seen in pictures. The buildings onshore were mainly delapidated, but possessed of a charm of their own. The mosque however was in beautiful condition and had fully working Tannoy systems , at 0400! 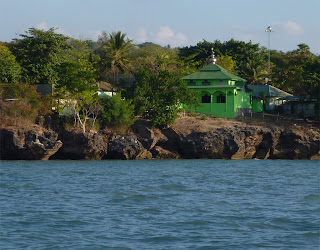 And the sunset is glorious here as in Northern Australia. Have you ever seen the posters for Miss Saigon? ...all reddish sky with a gloriously orange setting sun large on the horizon? Well, it really is just like that. Time for a photograph! 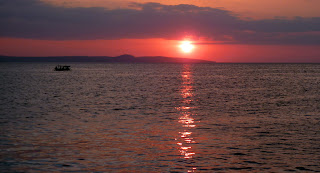 The anchorage, now dominated by small fishing boats was until last week host to about 70 sailing yachts from the Rally, is seems like we're the last to leave these shores! 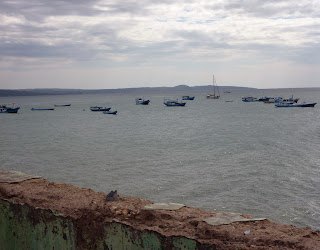 We have a persistent diesel problem to sort out. A careful examination led to the opinion that we still had dirty fuel, so it had to be drained and changed.

We needed help and help came in the form of a young man named On, who said he could supply empty jugs, sell or otherwise dispose of the foul diesel (he said it could still be used as stove fuel). On owned a dugout canoe and could also obtain new diesel. So our task was clear, we had to drain from our tank 250 litres of dirty fuel, whilst On had to transport  in 20 litre jugs to somewhere onshore, then return with 250 litres of new clean fuel. This was achieved using the same dugout canoe and 1-boy paddle power (although sometimes he had help). An amazing young man ...and he spoke English. 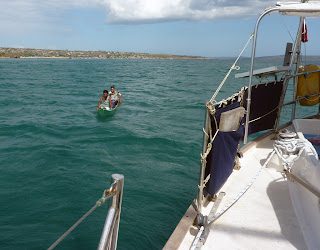 You will be pleased to know that we can now set aside the diesel saga.

Kupang the town was a great experience. It is quite an extensive metropolis with taxi-buses known as Bemas jostling for custom.  This young man is trying to persuade us to hop on board.  "Where are you from?" He shouts. 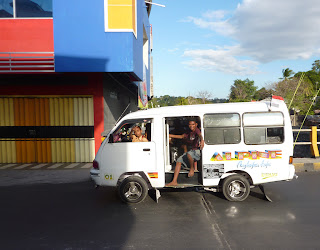 They are very individual to the owner/driver in decor and sound. Sometimes the horn tones play 'Colonel Bogey' or 'I wish I were in Dixie' and sometimes it was the in-bus entertainment system that was played to attract the custom. 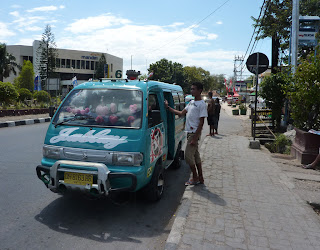 This bema had so many fluffy toys dangling in the windscreen. How did the driver see to drive? Perhaps he didn't and the lad hanging out of the door is shouting directions, who would know! 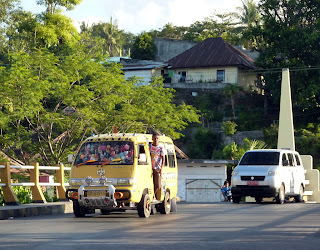 The main streets have tightly packed shops with totally open fronts, crowds are everywhere and everyone wants to say 'hello'. It was a completely happy experience just walking the streets of the town. 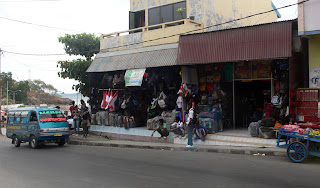 These little fellows were having a fine time in a small side street. 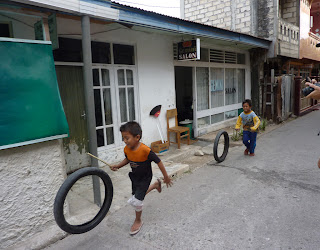 We tried local restaurants (all reasonably priced), I found a barbers shop and had a haircut, we sampled local delicacies from street stalls and went to the local mall.

The first time we spotted chickens being transported in this way we were too slow to get a shot off. But we needn't have worried, it's a very regular sight and two minutes later another motorcycle similarly loaded whizzed around the monument and across the bridge and you do have the early warning system of clucks to allow you time to focus the camera. 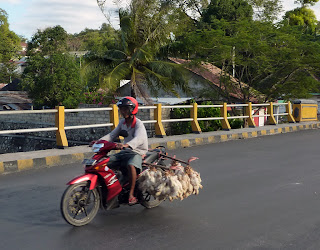 The Sail Indonesia Rally team had provided names and telephone numbers of people who could help: we needed to buy a SIM card for our phone and a dongle for internet access (yes they have 3G here - usually of the minimal EDGE standard in fact - for the geeks amongst you).


We also needed to obtain local currency - all these things become difficult when English is not commonly spoken and our command of Bahasa Indonesian is limited to looking up words in a dictionary. All of these hurdles were surmounted and we enjoyed nearly a week in Kupang...


(just a quick snap to show the baskets made from folded leaves. Now there's green for you!) 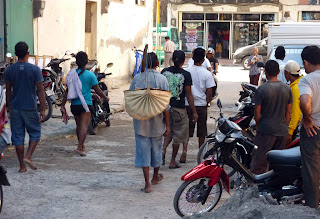 ...but we were now looking to the next stop.

Our first rough plan was to head north to Flores. Most of the fleet had gone that way and we were getting regular communiqués from Beth and Bone describing good and poor anchorages etc. However out of the blue we received an email from Jeremy and Kathy Spencer aboard their British Westerly Conway 'Sal Darago' suggesting that we might like to join them on the 'southern route'.