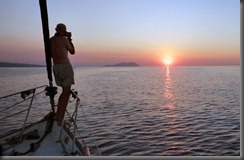 Leaving Gilli Lawat meant a 40 mile journey, which doesn’t sound much to those used to car travel, but it is about as much as we enjoy tackling in one day. It took us to a sandy shelf about 5 miles short of the offshore island of Satanda.  It was shown on the charts as merely a shallower part of the coastline without any offshore rocks. It was not on the list of anchorages, so both Sal Darago and ourselves were a little leery about staying, but as is frequently the case, the ad hoc anchorages that feel ‘chancy’ work well in practise. In fact it turned out to be a very peaceful night. Calm weather and light seas.

A glorious sunrise over the mountains was followed by an equally fabulous sail passing by the small volcanic island of Satonda and westwards to Pulau Medang, yet another small island with a deeply indented bay on its north coast. We were not alone that night. ‘The boys’ from Cheetah 2 were there, another rally boat manned by 3 young Kiwis, one of whom plays the guitar and we could hear the pleasant strains across the water as the sun went down.

Another 44 miles west saw us safely tucked inside a reef fringeing a small island offshore from Lombok, one of Indonesia’s major islands. Actually, that makes light of what was a rather freakish approach. We plotted a course over the western end of the island, but there are reefs there and the current was doing its best to push us onto them. However, we triumphed of course

. The island was named Gili Lawang and it was a very secluded anchorage, calm and peaceful with no sign of significant habitation, save for a tiny fishing boat, a small fire and a man tending the fire. 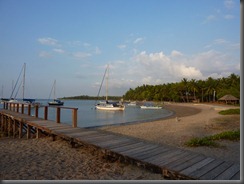 The next ‘event’ was based at Medana Beach and that was our target this time. A gorgeous light wind sail took us right into the narrow channel through the reef and into the ‘sort of’ protected moorings area. There were about half the number of mooring balls than there were rally boats, so there was going to be a bit of competition. We were probably the last to arrive for whom mooring balls were available, but ours was unbelievably close to the shore. At first we thought it was simply not possible, but after trying it out and with the added benefit of being tied to a big concrete block on the shore as well (courtesy of the management) it was fine and our preference for our spot grew as we watched those who were in apparently more spacious locations being twizzled around by the changing winds and currents. 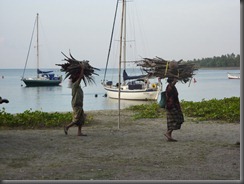 Ashore, life was going on as it had done for centuries,

…but with a difference, tripper boats taking tourists to the ‘Gillis’ (offshore islands), traders with trinkets waited at the jetty

…also the beach was home to an incipient resort, the new apartments were built and party furnished but as yet unoccupied.

There was however a bar and restaurant offering excellent bar prices and reasonable food. What more could anyone ask?