Thirty miles across the Selat Lombok [the Lombok Strait] and we are lucky with the currents. We had identified a shallow bay with sandy shallows offshore at a place called Ambat. 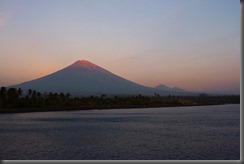 Not much information was available about  the spot as an anchorage, but it looked suitable. Apparently several other folks thought so too, because we were the seventh boat in the line-up nose on to the shore-line. As usual there was a small town nestling in the bay complete with mosque, and we even saw a couple of tourists!

The view looking towards the shore was very pleasant; mountainous and giving a dramatic backdrop to the tiny village. We were not planning to stop here as the ‘event’ was starting in Lovina Beach and if you want anywhere safe to anchor, it is better not to be the last one in! 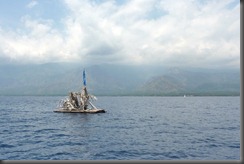 Another easy, light airs sail from Ambat to Lovina Beach. There were an enormous number of the unmanned rafts [shown left] which apparently provide a form of shelter for young fish and therefore a food source for larger fish. Fishermen are ingenious. Approaching Lovina Beach there was an invisible avenue in the coral reef through which we had to pass to reach the anchorage area. The GPS co-ordinates should be reliable, but we have found that some charts that folks use have slightly different off-sets and ‘invisible avenues’ are a bit nerve wracking. We need not have worried, the fleet was in and clearly visible and soon we were at anchor. 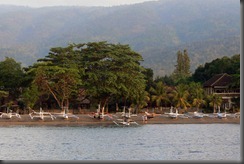 The dinghy launched, we rowed …yes rowed …too the shore (we need the exercise) and were so impressed with the preparations that had been made for us as a Rally. For a start there were young men on the beach just standing by to haul dinghies up onto the dry sand. Then looking around, there were rows of marquees; a reception tent housing the Rally officials and a row of kiosks displaying local foods and handicrafts. 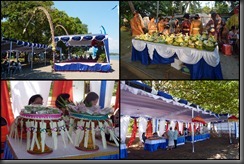 We did come to appreciate that we had to run a gauntlet of keen salesmen (and ladies) each time we came ashore. We need not have worried about a lack of necklaces, bangles, paintings etc. or even the availability of tour operators or laundry services. They were all there throughout the daylight hours. Plus there was a choice of very reasonable restaurants that were pretty much ‘open air’. They are called Warungs and seem to be like a restaurant only more informal. The food however was delicious. 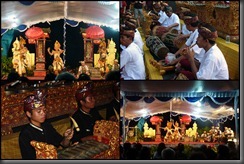 As it came to late afternoons, then numbers of people increased, the stage areas became crowded, and this happened virtually all week, local performers took to a temporary stage and we were treated to Balinese Dancing accompanied by various Gamelan orchestras. 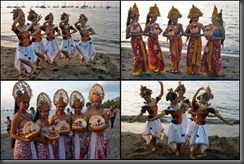 Before one of the shows, Liz made contact with a few groups of dancers waiting for their calls to go on stage. They were delighted to be photographed and struck wonderfully complex poses as she snapped away. All with a smile and a laugh. It would have been fun to know more detail about the significance of the dancers movements. Each dance was given a brief introduction, but they seemed to represent complex stories or parables.

Another day, another experience. We were invited to visit the Bull Races that were being held nearby. I confess that many of us, with our very western wariness of anything to do with cruelty to animals, were a little curious an reluctant. However, when the format of the event was explained (and the history checked out on the internet), we signed up for the trip. Well, it was a walk actually, and a good one at that. Probably only 2  or 3 miles, but the sun is strong and the roads are busy, dusty and without continuous pavements. 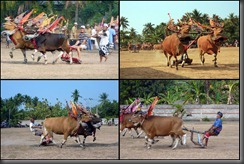 Reaching the stadium, complete with tiered stands and a band, we walked past the competitors. The bulls are chosen for their colour and their elegance, they are all light brown, immaculately groomed and their harnesses and sleds decorated using traditional colours and designs. As usual, there was a great deal of waiting around before the main event got going. Then, because the announcements were being made in Bahasa, it all started without warning. The bulls race in pairs pulling a sled and two sleds compete each time. Just one length of the field – turn about and race back. The bulls carry their tails high like flagpoles and even their noses are in the air like snooty ‘upper class’ bulls.

After the main events, which took an hour or two, foreign visitors were offered the chance to have a sled ride – well it would be churlish to refuse, wouldn’t it!