The nearest town to Lovina Beach is Singaraja. which has the honour of being the regency seat of Buleleng. The name incidentally means "Lion King" in Indonesian.  It has an area of 27.98 km² and population of 80,500. Singaraja was the Dutch colonial administrative centre for Bali and the Lesser Sunda Islands until 1953, and the port of arrival for most visitors until modern development in the south.

We needed a new diesel filter, so we took a taxi into town. Our driver proved to be a really jolly and interesting man who asked if we would like to see a couple of extra highlights. “Would we ever!”

Just a little way along the main road he turned down a lane and almost immediately we found ourselves in the middle of rice production. As always in Indonesia we were greeted with waves and smiles. 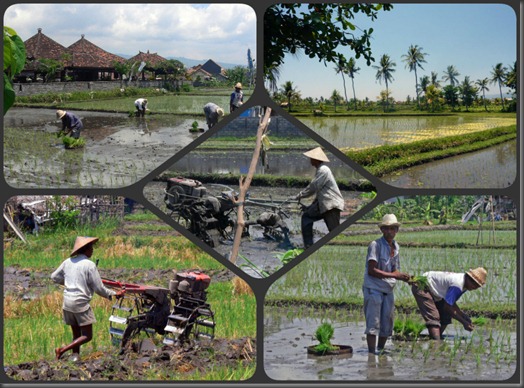 Our first sight was of field workers paddling in muddy water planting the young rice. We had been told earlier that two or even three crops of rice can be produced in one year, so planting, ploughing and harvesting take place side by side – although I’m not absolutely certain that mud of that consistency qualifies as ploughable. 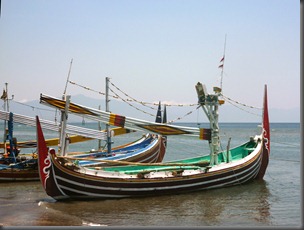 At this point we were only yards from the coast and our driver took us just a little further on to an old and obviously well established fishing port. It doesn’t appear on our charts, but the vessels here were sizeable and wonderfully exotic. The colours brilliant in the sunshine and being packed so closely together, the effect was visual overload! 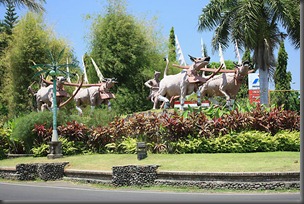 As I mentioned earlier, Singaraja is significant. We drove for several miles through the outskirts until we reached an enormous statue of the bulls in a sled race. A wonderfully impressive structure, doubly so as we had witnessed the races ourselves only a short time ago. 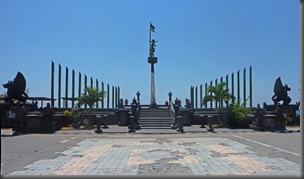 Our driver was determined that we would see the highlights, so we were taken to the pride of the port. A refurbished walking area with various levels and a massively impressive Yudha Mandala Tema monument celebrating an Indonesian freedom fighter in their struggle against the Dutch colonialists in the 1940s. A bit like ‘Liverpool Resurgent’ on Lewis’ corner …but with clothes.

Just opposite was the Ling Guan Kiong Chinese Temple. Always worth a visit as they are so exotically painted and the architecture is just so incredibly different to our western eyes. I’m sure there is a symbolism, but we walked over a bridge to enter the temple area and were met by an official who had English sufficient to point out the main features. One of which was a brightly painted bell – with the casting mark ‘Kent’ on the outside. 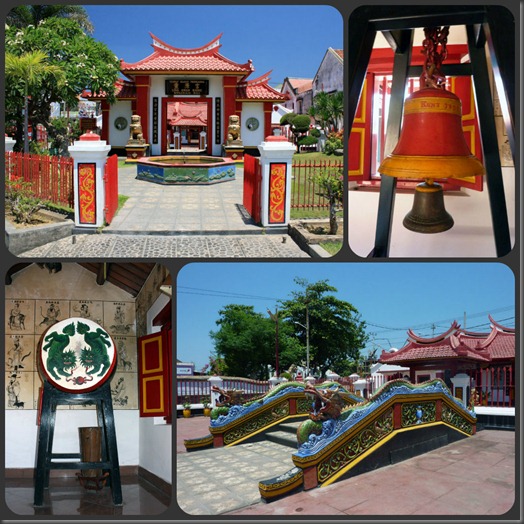 Leaving the city and travelling further east our driver took us through more rural rice growing areas and we saw – albeit from a polite distance – a funeral procession with mourners carrying umbrellas. Sorry about the hazy picture – it was zoomed quite a lot. 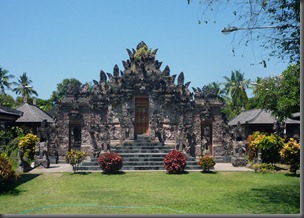 Close by is the Pura Beji Temple.

Dedicated to Dewi Sri, the Hindu goddess of agriculture with particular emphasis on irrigated rice fields. 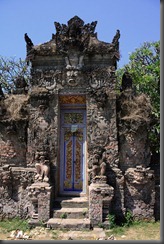 We also visited the nearby Pura Dalem temple Always good for a photo opportunity, the temple is locally renowned for its carvings. 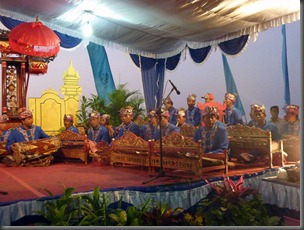 In the evening there was another concert on the beach. More dancing and of course …gamelan music – I think I have heard the tune before!