Leaving Toowoomba, we had a wonderful drive south. Warwick was our next target destination, less than 60 miles away, but with so many townships and tiny villages en route we knew it was folly setting our sights too far ahead. 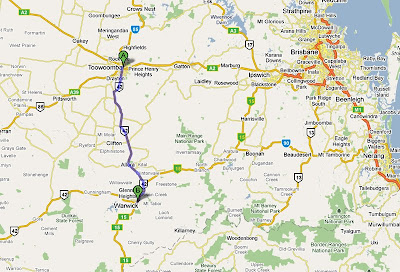 In fact just outside Toowoomba is the Bull's Head Tavern, possibly the oldest building in Queensland. 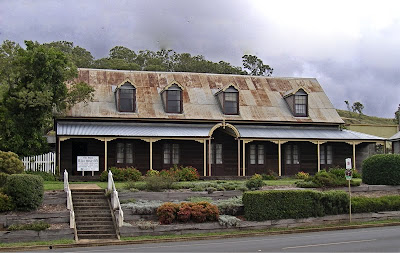 It was on this route that we had our first taste of the sheer vastness of the landscape in Australia. We all know it's a big place, but it is reflected in the immediate landscape, there are fewer boundaries marked, less buildings etc.

We popped into a small village named Nobby. Having read about two of her illustrious offspring; Arthur Hoey Davis, a turn of the century Australian authur who adopted the pseudonym Steele Rudd, after whom the Rudd pub is named and Sister Elizabeth Kenny who was a phenomenon in the field of nursing. Try following this link to see what I mean. 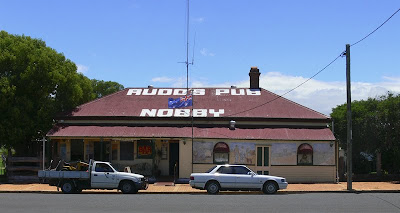 Nobby may be a tiny village, but it did rate a School of Arts! 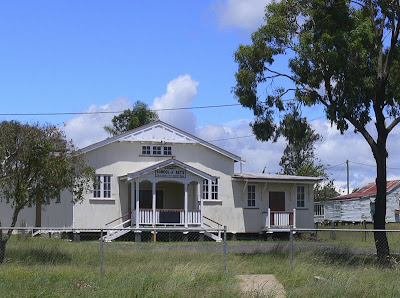 And some delightful farm dwellings on the outskirts. 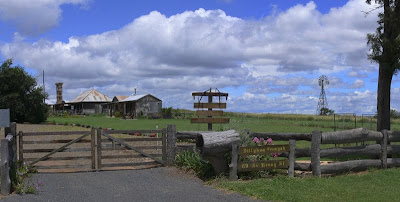 After just a short drive south we paused at Allora - because it looked charming. The massive hotel - so many Australian towns have similar gigantic hotels, we can only assume that it speaks of the travelling style of yesteryear, when towns were days apart and folks just had to stop somewhere each night. 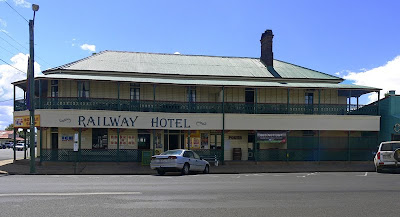 We were attracted by this bank as well. 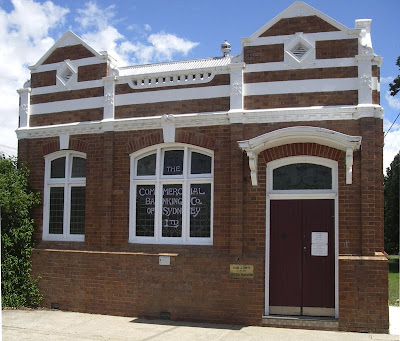 Oh! ...and this charming little church. 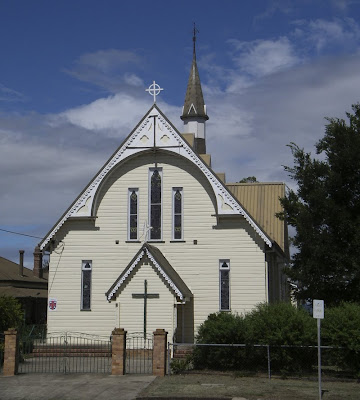 Approaching Warwick, we couldn't avoid references to Jackie Howe. You have to appreciate that Liz had an uncle of that name hence the significance to us. He was a champion sheep shearer in the days prior to mechanisation. Such men were local heros and Jackie boasts a commemorative sculpture... 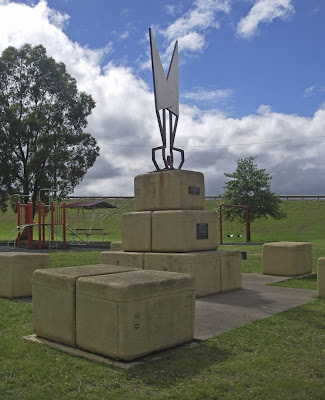 ...and a Motel named in his honour. In 1892 he sheared 321 sheep in 7 hours and 40 minutes using hand shears. The record stood unbeaten until 1950 by which time powered shears were in use. Talking to modern sheep shearers, they reckon that 200 sheep per 8 hour day is expected of a good shearer. So Jackie was quite a champion. On the day he broke the record he was wearing a navy blue sleeveless vest that became the shearers' badge of office and was called a 'Jackie Howe'. 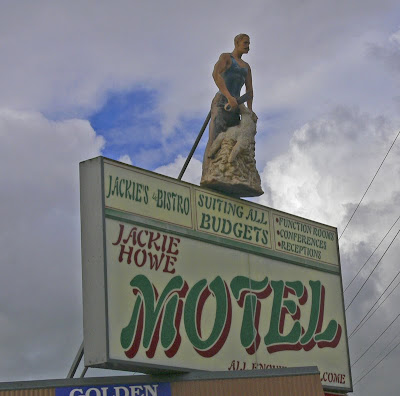 Warwick the town [pop: 12,562], lies on the banks of the Condamine River, 130 kilometres south-west of Brisbane and is the administrative centre of the Southern Downs Local Government Area. The surrounding Darling Downs have a strong agricultural industry for which Warwick, together with the larger city of Toowoomba, serve as convenient service centres.
A bit of history:
[Patrick Leslie and his two brothers originally settled in the area as squatters, naming their run Canning Downs. In 1847 the NSW government asked Patrick Leslie to select a site on his station for a township, which was to be called 'Cannington,' although the name 'Warwick' was eventually settled on. Land sales were held in 1850, and the first allotment was bought by Patrick Leslie. The telegraph to Brisbane was operating by 1861. The 1870s were boom years for this new town. In 1871 the railway reached Warwick, a brewery was built in 1873, then a cooperative flour mill and brickworks were completed during 1874.
We had a browse around the town. There are lots of grand buildings dotted around and several that just have a charm of their own.]
The Warwick Green Belt, on the banks of the Condamine river features a Sculpture of Tiddalik the mythical frog that drank all of the fresh water in a renowned Aboriginal Dreamtime story. 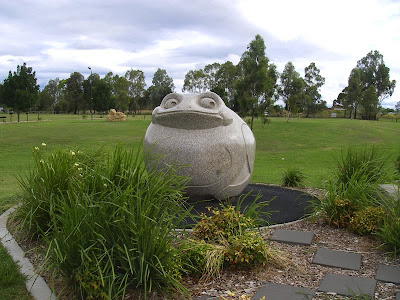 Just one more building that we found attractive. They are the Law Courts. 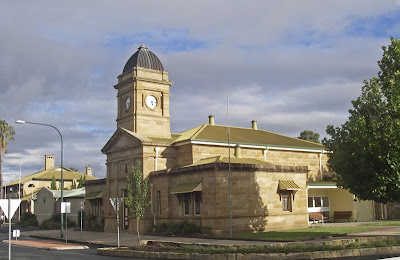 Thanks for sharing information on The Voyages of Ellida of Laira, i have visited your blog great post...!!!

Good sharing ever. thanks a lot for such a nice sharing. Home builders toowoomba

I have seen your blog for the first time and found it a well designed blog. thanks for sharing.
trailers warwick qld